Diabetic girls no longer find it difficult to get a partner in Gujarat. A matchmaker bureau is helping them find an ideal soulmate.

When Gopal, 22, an Ahmedabad-based bank officer, fell in love with Maya, a comely college girl, his joy knew no bounds. When she reciprocated after a while, he was determined to marry her. But his dream collapsed soon after. 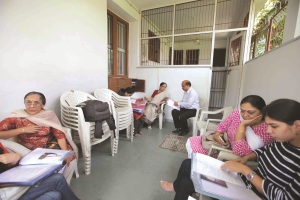 Nurturing Dreams: Make My Life, the first marriage bureau for diabetics in India, has transformed hopes into reality.

When his parents came to know that Maya suffered from juvenile diabetes, they did not agree to the proposal. Both Gopal and Maya were heartbroken. Maya could deal with regular insulin shots and tests that were a part of her life. But the insensitivity of others around was what hurt her the most.

Dr Seema was a good-looking post-graduate doctor in her early thirties, earning a six-figure monthly salary at a Vadodara hospital. But that hardly mattered when she was looking for a spouse. The fact that she was diabetic was enough for prospective grooms and their families to shy away from her. As time went on, she became depressed and started suffering from occasional convulsions.

These are only two examples of people shunned due to biases and misconceptions regarding diabetes in Gujarat. Many families are opposed to marriage with a person who has to take multiple insulin injections, be careful of diet and manage lifestyle in the face of fluctuating sugar levels. Plus, there is the risk of health complications.

The western state, often considered the diabetic capital of India, has a high incidence, with some 40,000 youths with Type I diabetes. Type-II diabetes is believed to be present in 20 per cent of the adult population in Gujarat.

Seeing the suffering and humiliation that unmarried, Type I diabetic youngsters go through, Ahmedabad-based diabetologist Dr Mayur Patel decided to give them a helping hand and change their lives. He started a help center in the city called, Make My Life. which is probably India’s first marriage bureau for diabetics. And it was apt that the centre was started in Ahmedabad, one of India’s top medical tourism hubs. 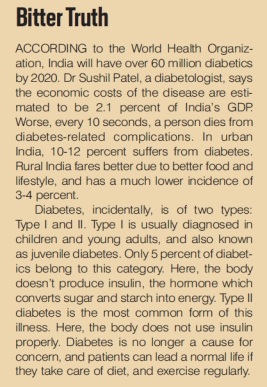 Make My Life was launched by Patel, who is also the chairman of the All-India lnstitute of Diabetes and Research, with the help of well-known matchmaker Sangeeta Patel. “When Type I diabetics fail to find a bride or a groom, they suffer from depression. This worsens their sugar levels. We want to make their lives sweeter,” says a beaming Sangeeta.

Patel, who has treated some two lakh diabetics over the last 27 years, receives countless inquiries from worried parents from all over the country in this regard. “Type I diabetic youngsters, especially girls, are severely discriminated against when it comes to marriage. But all the problems faced by them are easily manageable,” assures Patel.

Almost 90 percent of inquiries received from all over India are from girls. Gita Shah, 31, is one of the beneficiaries of the bureau. “I am a college lecturer and the only diabetic in my family. Would-be grooms pull a long face after knowing about my disease,” says Gita. “However, Sangeetaben has been able to convince some of them that my ailment is well-controlled and I can lead a normal life. I am hopeful of finding a husband soon.”

Patel is doing yeoman service in this field as his counselling and medical services are free. He further boosts the confidence of diabetics by conducting tests and showing the reports to drive home the point that the management of this disease is easy.

Rekha Pamar, 30, is another diabetic. Her parents were worried about her future considering her age and medical condition. So after coming to ‘Make My Life’, they decided to lower their expectations about grooms. “Though I am beautiful and make Rs 90,000 as a public relations manager in a foreign bank, I have decided to go for a boy from a good family background, even if he is not handsome or earns less than me,” she says.

Patel says that as he gets inquiries from outside Gujarat and feels that such marriage bureaus should be started in other states in India as well.
Is there another savior somewhere?