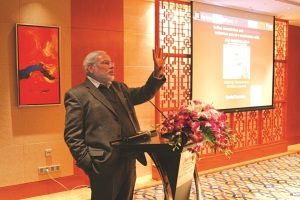 If one were to observe Narendra Modi’s overtures to the neighboring countries, things bode well for India. However, it is the big neighborin the north, People’s Republic of China, which is of crucial importance for growth and peace. The signs are positive. It was China’s premier Li Keqiang who was the first foreign head of government to call upon Narendra Modi to congratulate him on his win. He conveyed a desire for “robust partnership” to build strategic and cooperative ties for peace and prosperity. And if that was not enough, Delhi rolled out the red carpet for the Chinese foreign minister Wang Yi during his recent visit.

The meeting between Asia’s two biggest giants is crucial not only for strengthening bilateral ties, but also to ensure a stable, regional order. This is also the 60th anniversary of the “Five Principles of Peaceful Coexistence” or the Panchsheel Agreement, making 2014 an important year for Sino-Indian relations.

The 21st century has been hailed as the Asian century, dominated by Asian geopolitics, economy and culture. Naturally, China and India will have an immense role to play here. Post-cold war, in the early 1990s, both Indian and Chinese economies were at the same level. But later, China’s economy surged forward. Today it is four times that of India’s, its influence spanning from Africa to Latin America, and from the Caribbean to Central Asia.

But with Modi’s historic victory, this is likely to change, as a new era of Sino-Indian relations will set in. Modi set his sights on China even when he was the chief minister of Gujarat. He officially visited China thrice and was able to project “Brand Gujarat” successfully. He invited Chinese companies for partnerships and joint ventures and met mayors, who were chief executives of big city states like Beijing and Shanghai, and discussed investment opportunities for Gujarat with them. To boost economic and cultural ties, Modi expressed keenness to introduce Mandarin in Gujarat universities in 2011. Already, the language has been introduced in Gujarat University in Ahmedabad and MS University in Vadodara. Modi was also keen on developing port facilities.

During his visits to China, Modi was hosted at the Great Hall of People, typically reserved for the heads of state or government. China sees Modi’s admiration for its own growth model as an opportunity for furthering investment in India. In 2011, Modi said in Beijing: “China and its people have a special place in my heart. I admire their hard working, disciplined and resilient nature and above all, their sense of history. Our cultural bonds are very strong and deep-rooted. Over the years, our relations have further strengthened. We are committed to making them still better, fruitful and productive.”No wonder Modi has been called India’s Deng Xiaoping or India’s Nixon.

THE BAGGAGE OF HISTORY

Despite the present bonhomie, China and India have a lot of history behind them, and not all of it is pleasant. Who can forget the 1962 Indo-China war? Prior to it, relations between the two countries were fairly warm, as both the countries, recently de-colonized, talked of Asian solidarity. However, The Dalai Lama’s crossover to India in 1959 and Nehru’s forward policy ultimately led to a devastating counterattack by China, which led to a humiliating defeat. After more than a month of fighting, China declared a unilateral ceasefire and withdrew, while keeping a firm grip on Aksai Chin.

Boundary disputes continue to be devil both countries, as they share a 4,057-kilometer border, one of the longest in the world. Disagreements and a lack of clarity on the Line of Actual Control and the McMahon Line continue to cause skirmishes. China refers to Arunachal Pradesh as “Southern Tibet” and lays claims to this territory. India, on its side, has beefed up its military in the Northeast. Water resources is another area of dispute,
as China and India share 16 rivers. China is constructing a number of dams in the upper “Modi would vigorously promote economic engagement
with China in his first few years in office. Following that, both powers would scramble to protect their maritime interests in the South China Sea and Indian Ocean. They would, later on, compete in arenas of energy and maritime security.” —Jagannath Panda, research fellow, Institute of Defense Studies and Analysis, Delhi reaches of the Brahmaputra river, but says it is of no concern to India. India, too, has set up hydropower stations in Arunachal. 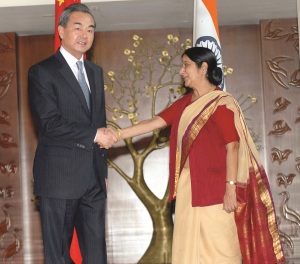 Nonetheless, it is trade ties which will take both the countries forward and they are concentrating on them. Sino-Indian trade reached $73.7 billion in 2013, as per the Department of Commerce, Government of India, with China emerging as India’s largest trading partner. However, India faces a growing trade deficit with China. Currently at a massive $31.42 billion, this is an increase of $2.5 billion as compared to 2012. India must push for more exports in the IT sector and get hurdles in the

China had initially proposed to finance 30 percent of India’s planned infrastructure spending by developing railways, roads, telecom and power. Both countries seek to reach $100 billion in bilateral trade by 2015. Closer ties with China would also allow India to collaborate on projects that enhance border cooperation, regional and transcontinental connectivity such as the Bangladesh- China-India-Myanmar corridor in the southern frontier, the new Maritime Silk Road in the southeastern frontier and the New Silk Road in the western frontier.

Modi also needs to come to terms with a rapidly changing global structure. If India aims to be an Asian power, it can’t ignore the ongoing disputes in the East and South China Sea (SCS). China has been caught in a bitter territorial spat with its neighbors over rights to explore oil and gas there. It has drawn the Nine Dash Line, a border which encompasses the entire SCS, and an Air Defense Identification Zone (ADIZ) in East China Sea, thereby antagonizing Vietnam, Japan and the Philippines. China recently deployed an oil rig between Parcels Island and the Vietnam coast, sparking off violent anti-China riots. Chinese ships have also been ramming Vietnamese ships in the SCS. 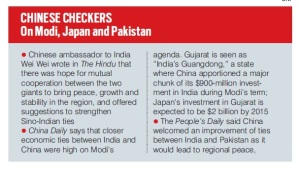 Japan is also fighting a bitter territorial battle with China in the Senkaku and Diaoyu Islands in the East China Sea. The Philippines recently
took China to the UN tribunal over the territorial scuffle; the tribunal ordered China to prove its claims. These countries will now seek a wider participation of India in regional matters and the country must use this opportunity to cultivate economic and security ties with them. However, strategic interests are tied up witheconomic ones and India is interested in theSCS for two reasons. One, the SCS is said to have about 11-billion barrels of oil and 190-trillion cubic feet of natural gas. India has signed agreements with Vietnam for exploring and exploiting oil in the Phu Kanh Basin of the SCS.

China feels India is trying to counter Chinese behavior in the Indian Ocean by venturing into the SCS. India maintains that the area comes under the exclusive economic zone of Vietnam.

Two, India maintains it will support free passage in international waters. The SCS is the world’s second busiest international sea lane, with important sea lines of communication. Indian interests are similar to the US in maintaining freedom of navigation in the SCS. Jagannath Panda, research fellow at the Institute of Defense Studies and Analysis, says: “Modi would vigorously promote economicengagement with China in his first few years in office.

Following that, both powers would scramble to protect their maritime interests in the South China Sea and Indian Ocean. They would, later on, compete in arenas of energy and maritime security.”

SENSING OPPORTUNITIES Modi at the Yangshan seaport, China, in 2011

Countries, such as Japan and the US are courting India to balance China’s growing influence. Hence, Modi’s visit to Japan in July and the US in September will be closely watched by China. At the Shangri La Dialogue, which took place in Singapore from May 30 to June 1, Japanese PM Shinzo Abe spoke about preserving maritime law, strengthening regional institutions and cultivating ties with India. At the same conference, US Defense Secretary Chuck Hagel accused China of playing a “destabilizing” role in Asia by coercing its claims.

An important topic of discussion in Modi’s meeting with President Barack Obama will be strengt-hening the US-Asia pivot by maintaining regional stability in the SCS and India’s entry into the Trans Pacific Partnership, a free trade agreement between nine countries in the Asia-Pacific region.

Obama has been seen as weak on Russia and China, and hence, he would be looking to reaffirm American leadership in Asia and would need a strong ally such as India to counter China. He may set the base for a possible US-Japan-India trilateral relationship. China, on its part, will seek to enhance the China-Russia-India trilateral cooperation. India must maintain a steady balance between the US and China.

The world presents a plethora of opportunities for India in a new era of globalization. And it is up to India and Narendra Modi to take advantage of them.